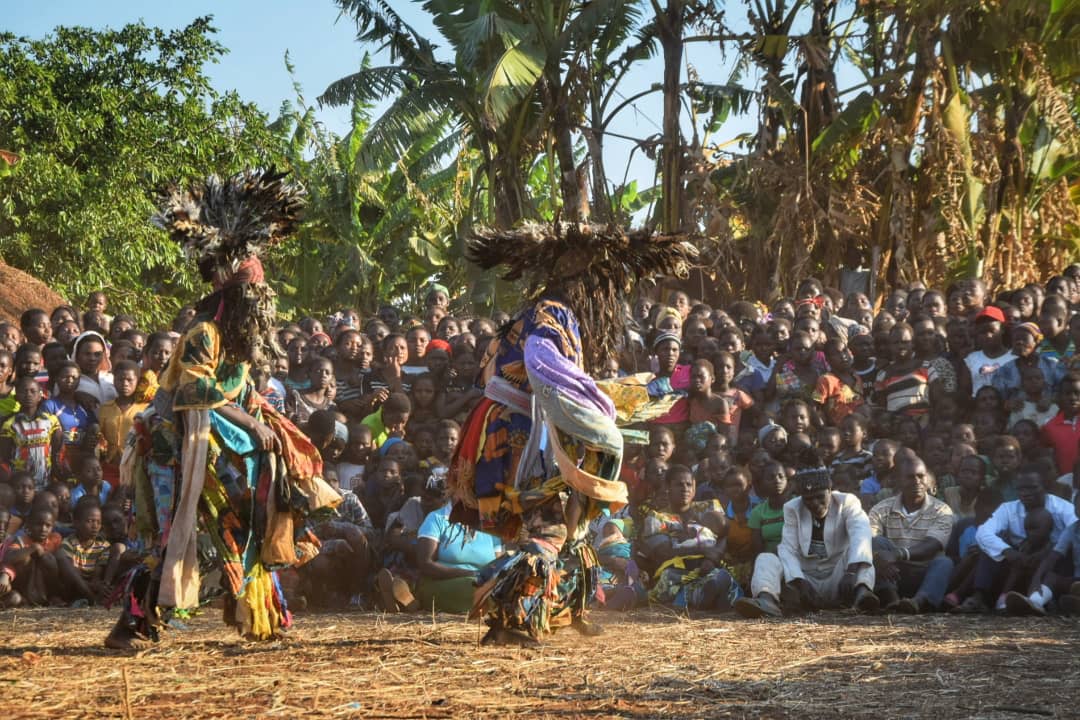 Gule Wamkulu – The Upside-Down World of the Chewa People Religion

The sacred dance of the Chewa People and our meeting with one of the oldest religions in Africa.

We knew that among the Southern African nations, Malawi is probably the densest with traditions, cultural peculiarities, full of masks, dances, music…

We heard about the complicated initiation ceremonies in Malawi, but nothing we knew about its secret society, the Nyau.

Before arriving here, we tried to find out more about the culture of Malawi, and how to see a traditional ceremony or dance in its real contest (not as a show for tourists).

That’s how we discovered about the Gule Wamkulu… but where and how to see it, was a totally different matter.

The internet didn’t have an answer, so we joined Malawian groups on social networks and asked locals and expats living in Malawi.

Still no real answer. And just when we had lost our hopes, the incredible happened: we literally bumped into a Gule Wamkulu!

The Secret Society of the Chewa People: Nyau

The religion of the Chewa people, Nyau, apparently originated in today’s Democratic Republic of the Congo, where a rock painting depicting Kasiya Maliro and dating back to 992 AD has been found.

Kasiya Maliro is the costume representing the mother. In Malawi, it is called Kasiyamaliro and is the Great Mother of Gule Wamkulu and probably the most important Nyau figure.

It is said to be the principle of the Nyau, the symbol of the mother of everything.

Serving as a comforter of souls in transition, she is almost omnipresent at every ritual performance or traditional dance of the Chewa culture in Malawi.

The Kasiyamaliro is an ancestral spirit, an antelope of pure and ancient origins.

It seems to have been born from the white and serene waters of the earthly depths, from which all the Chewa spirits come, the depths of the world.

Under its belly lies the abyss of the world, the womb of the Great Ancestral Mother, and the tomb.

The Chewa people, therefore, believe in the existence of the Nyau (or Nyao), a secret society whose name means mask or initiation.

The Nyau society is composed of initiated members of the Chewa and Nyanja people, the initiation ceremonies are separated for men and women.

They have different knowledge learned and with different ritual roles in society based on gender and seniority. Only initiates are considered mature and members of the Nyau.

There is a Nyau society in each village, but they are part of a vast network of Nyau extending on Southern Africa.

Through the central area and part of the southern regions of Malawi, eastern Zambia, western Mozambique, and areas of Zimbabwe, where the people Chewa emigrated from Malawi.

The Chewa adapted themselves to some aspects of Christianity which, still today, is still the most practiced religion in Malawi, with Chewa members belonging both to a Christian church and to the Nyau society.

To protect themselves from the British colonial authorities, the members of the Nyau began to establish punishments.

Anyone who revealed the mysteries of the secret society to uninitiated people or, worse still, who were not part of religion, was punished.

The Gule Wamkulu explains the world by way of its ghosts, gives complex answers to the mysteries of life and death… It’s a serious matter, to be vehicle for the spirits you’ll have to undergo an initiation into the secret society, so secret that one can be killed just for talking about it. That’s why anthropologists still know very little about it

Revealing the real names of the people wearing the masks could also be punished with death. This is one of the main reasons why not much is known about the origins of the Nyau.

Some other ethnic groups have developed various and elaborate traditional dances in Malawi, including the Ngoni, the Yao, and the Mang’anja.

But the Cheya Nyau can be considered the most elaborate of secret societies and dances in the areas around Lake Malawi.

The Gule Wamkulu is the upside-down. Every element of reality has its double, literally every one… The mother, the dog, the helicopter, the British colonialist with a red nose and burned face…

The Chewa believes that life exists within their ancestors and those not yet born, just like it exists in the living.

Nyau’s beliefs include communicating with those who died, or with their spirits, calling this pemphero lalikulu (great prayer) act.

They believe in the presence of God in everyday life, a God that is both male (in the sky) and female (in the earth) at the same time.

One of the most important ritual moments in the Chewa culture of Malawi is the traditional Gule Wamkulu dance and ceremony.

The symbolism of the spirit world is represented by the Gule Wamkulu (great dance), which incorporates mwambo (traditions), masks, songs, and dance.

Primarily the Nyau perform their masquerade dances at funerals, commemorations, and initiations.

Each dancer represents a special character related to the mask or animal costume (or anthropomorphized animal) he wears.

The zilombo (wild animals) are large structures that cover the entire body and represent mostly animals, while the masks worn on the face are mainly ancestral spirits.

Before the Gule Wamkulu dance, the Nyau dancers observe a series of rituals associated with their secret brotherhood.

The secrecy behind the Nyau incorporates a coded language, riddles, metaphors, myths, and signs.

During masked performances, women and children often run into homes when a Nyau mask threatens them, as masks are worn only by male initiated members of society and represent male knowledge.

At the time of the exhibition and in the rituals, the masked dancers Nyau are considered spirits of the dead.

As spirits, they can act with impunity and there have been attacks and deaths during traditional ceremonies in Malawi in the past.

The dances of the Nyau involve intricate footwork, jumps, acrobatics, mimed fights, and the casting of dust in the air.

Dancers respond to certain rhythms and drum calls based on the type of mask or character.

Although it may be considered a popular dance by many, this is certainly not the case.

The Gule Wamkulu should rather be considered a religious dance since its function is to communicate with the ancestral world.

In 2005, Gule Wamkulu was ranked as one of the 90 masterpieces of the oral and intangible heritage of humanity, a UNESCO program for the conservation of intangible cultural heritage.

In the dance/ceremony we saw, the masks and costumes are inside a circle made up of the people of the village, the position of the people in the circle reflects the role in the society.

Some masks took sand from the ground and cast it to the spectators, in the front row there were the children, who ran away and then returned to their initial position.

When the first colonists arrived in Malawi, they of course tried to ban this “devilish thing”… But, as it very often happens with the Catholics, they ended up mixing elements of the Christian mythology into the Shamanist practice: the great mother became Maria, the white colonists Saint Peter, and so on.

To know more continue Reading the Full Article on Cycloscope.net

More Modern and Less Spiritual African traditions? Have a look at South African Pastors. The Most Weird, Bizarre, Dangerous Self- Proclaimed Prophets.