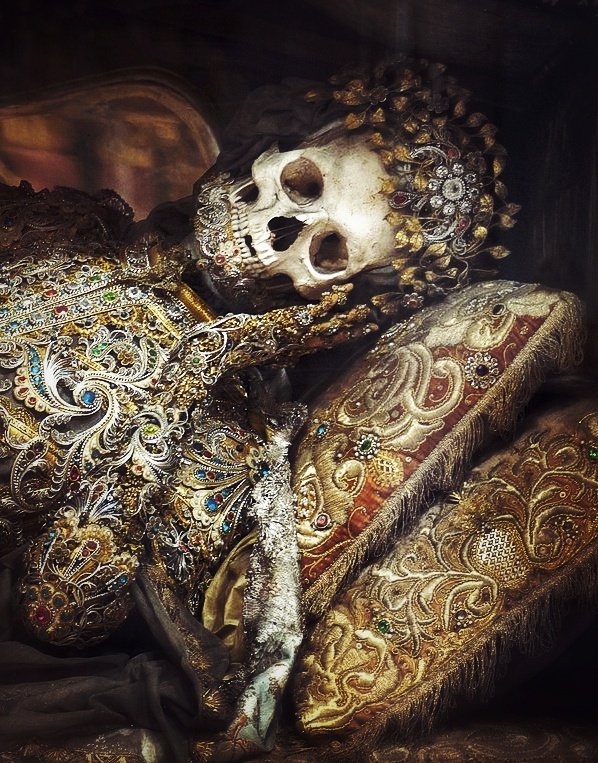 Memento Mori: 6 Dead Bodies Displays You Have to See

A silent reminder of the swift passage of life on Earth and our own mortality. 6 Dead Bodies Displays You Have to See

The afterlife is just fancier for some of us. In a state of repose in churches around Central Europe are these jeweled skeletons ornately decked out for their eternal rest. Yet despite their fascinating garb, they have been forgotten.

When on May 31 1578, a winemaker near Rome found a crypt with hundreds of skeletons from the first years of Christianity, the Catholics saw a great opportunity.

Who they were in life is impossible to know, but they decided that must be early Christian martyrs. They could make new powerful relics to send north, were their fellows were struggling against the reformists.

To identify the martyrs skeletons, the Church sent teams of psychics that would see a golden glow and feel a faintly sweet smell.

This skeletons became the “catacomb saints,” revered holy objects regarded by 16th- and 17th-century Catholics as protectors and personifications of the glory of the afterlife.

In each receiving convent, skilled nuns and monks would develop their own style for enshrouding the bones in gold, gems and fine fabrics. It could take up to 3 years, and the money spent on it are incalculable.

In the late 18th century, with the rise of the Enlightenment, Catacomb Saints were banned, taken away from the churches and destroyed.

Some of them though remained tucked away in hidden places, until someone (a very interesting guy actually), less than 10 years ago, rediscovered them.

By the author of the discovery

the Crypt of the Capuchin Friars, a series of small chapels beneath the church of Santa Maria della Concezione dei Cappuccini in Rome, contain the bones and mummified remains of an estimated 4,000 individuals.

Mystery shrouds the origins of the ossuary. When the Capuchins moved to this site in the 1630s they brought with them the bones of many of their dead that had previously been stored at a nearby convent.

At what point – and why – somebody then decided to start transforming the collection into this artistic marvel is not known.

The earliest written record of the ossuary comes from 1775, when it attracted the attention (and admiration) of a notorious French libertine, the Marquis de Sade.

Of the total six rooms, one is entirely dedicated to skulls, one to pelvises bone and one to leg and thigh Bones.

The Toraja population lives in the remote highlands in the south of the Indonesian island of Sulawesi, about 300 km from Makassar.

For years, they have lived in total isolation and keeping intact some of the practices related to animist worship.

The cult that the Torajans practice is called Aluk To Dolo, and it divides the world into underground (of the dead), superior (paradise) and earthly.

In the Toraja culture, the funeral rite is the most elaborate and expensive event of all, and is performed to ensure that the soul of the deceased reaches the land of Puya (the land of souls or afterlife), located according to the cult, from somewhere in the highlands.

Death is not a sudden event but rather a gradual process; a deceased person is not dead but asleep, and dies only when the funeral ritual is concluded.

The funeral rite is done a few months or even years after the actual death. This depends on the social status of the family and how long it takes to have the necessary funds for the ritual.

Meanwhile, the body of the deceased is mummified and kept in the house where he was born.

The funeral rites of Toraja are important social events, occasions for entire families to come together, and renew relationships, remembering roots in the way of the ancestors. These events last for several days and are known as Rambu Soloq.

Check out Toraja: Misadventures of a Social Anthropologist in Sulawesi, Indonesia

The Capuchin friars arrived in Palermo in 1534 and they were given a small chapel dedicated to Santa Maria della Pace.

A few years later they decided to completely rebuild the church and added the convent, but in the meantime the burial rite began under the church, in a common grave where the bodies of the friars were stacked on top of each other.

After years they decided to reopen the mass grave to offer a better burial to the brothers and with great amazement no bad smell came from that place and the bodies were found intact, complete with hair and beard.

This fact convinced the friars to create a series of underground rooms where to embalm and better preserve the body of the brothers.

Within a few years, even the nobles wanted to be mummified to “defeat” death and over 8,000 bodies were collected in three centuries.

The bodies are all arranged following a certain logic: on the one hand there are all the women with their most beautiful clothes, a part is reserved for the nobles, in a room there are all the members of the lower classes and so on.

The extraordinary state of conservation of these bodies and their clothes allows you to travel through three centuries of history, scrutinizing the fashions of the time.

You can appreciate the uniforms of the military, the beautiful women’s clothes, some still with gloves, embroidered stockings and ankle boots, the refined vestments of the high prelates.

Check out The Living Dead: Inside the Palermo Crypt

5. Chinchorro – The Oldest Mummies in the World

Roughly 2,000 years before the Egyptians began mummifying their dead, the people belonging to the Chinchorro culture had already developed fairly sophisticated methods for embalming.

These nomadic hunter-gatherers of the Atacama Desert were pioneers of tattooing and fishing, with 90% of their diet consisting of seafood, but that’s not what’s most interesting about them.

The Chinchorro loved their deads, started preserving them before any other human culture, and even brought the mummies along during their frequent wanderings.

Several sophisticated techniques were used, bit the most common procedure is this.

They would carefully remove the skin with stone tools (sometimes the skin was found in a single piece) then extract the muscles and organs exposing the skeleton.

The Chinchorro would then fill out the body with plants, clay and reinforce it with wooden sticks to be able to carry it around and display it for ceremonial occasions.

Finally, they would but the skin back on and cover the face with a mask.

So far, 282 mummies have been found, many of them children.

But there’s in more thing the Chinchorro can teach us:
The oldest mummies in the world, after “surviving” all these millennia, are dying again.

The quick increase in humidity happened in recent years in the Atacama desert
had begun consuming the mummies’ collagen.

This is the first example of deterioration caused by climate change, but there is no reason to think it is not damaging unearthed heritage materials everywhere.

Check out BEYOND DEATH: The Chinchorro Mummies of Ancient Chile

6. Chachapoya, the Warriors of the Clouds

The Chachapoyas, or “Warriors of the Clouds” lived in the Andes, part of a nation ruled by the Incas. They lived from the second half of the first millennium of our era.

Evidence of mummification may be seen on the dead people. Embalming of the skin and internal organs together with the removal of the anus.

The facial cavities had been stuffed with cotton. The mummified people were placed in a very flexed, sitting position.

They gave their dead an excellent importance, considering them still a part of the living population to the extent that dead chiefs might even participate in rituals or conferences.

They living would typically go visit the dead in their tombs, changing their wrappings and take them food and drinks.

Check out Warriors of the Clouds: A Lost Civilization in the Upper Amazon of Peru 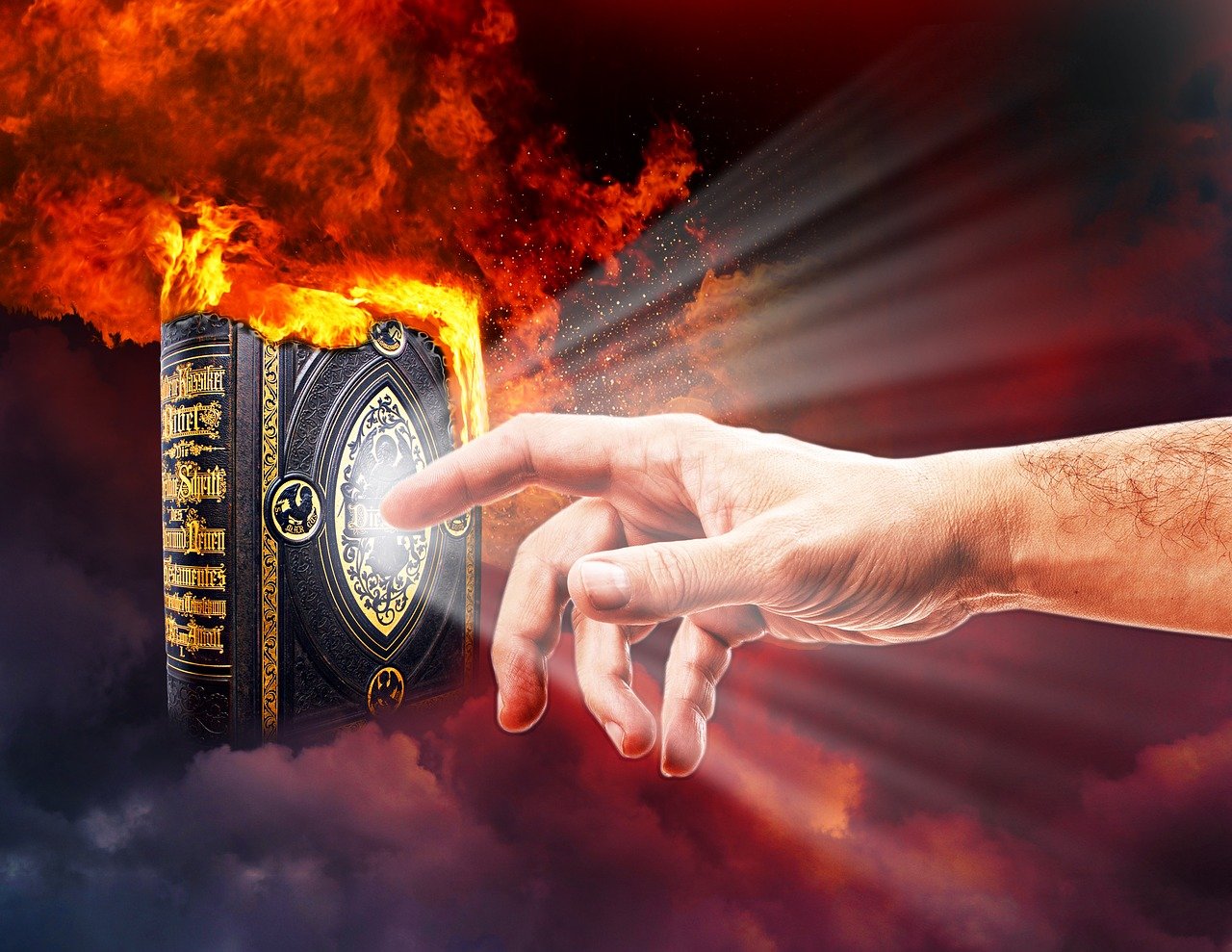 7 Magic, Lost or Supernatural books you wish were on your nightstand