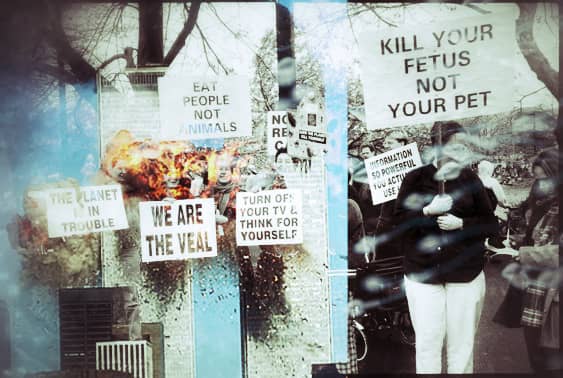 Church of Euthanasia. Save the Planet, Kill Yourself!

The Church of Euthanasia, founded by transgender music artist Chris Korda, has a solution for the overpopulation destroying the environment:

“Save the Planet. Kill Yourself”.

In 1992, Chris Korda, a Music artist and software developer, had a dream.

An alien revealed to her that our planet is failing, the ecosystem is failing and our leaders are lying to us and deny the real reasons for our problems.

It’s an undeniable truth that the over-abundance of our specie is the main reason for pollution and intensive farming.

Or at least, it is so nowadays, maybe not in the early Nineties.

If our number is the cause of the problem, what’s the solution?

When Chris waked up from her dream, the Church slogan was already in her head: “Save the Planet, Kill Your Self“.

In Boston, Massachusetts, together with the engineer Robert Kimberk, they founded the Church of Euthanasia, a non-profit organization.

They became Reverend Chris Korda and Pastor Kim, creators of what they define the “only anti-human religion” in the world.

The Church of Euthanasia doesn’t support any kind of violence.

They are vegetarians but “support cannibalism for those who insist on eating flesh“.

And any other voluntary form of population reduction.

The First Public Steps of the Church of Euthanasia

Soon after the creation of the Church, they participated at the Boston Population Awareness Day.

Members of the Church chanting the slogan “Save the planet! Kill yourself!” and carrying baby dolls covered in blood did not please the other attendees.

According to the official website of the Church, people were so upset that they started chanting “Kill the planet! Save yourself!“.

After te intervention of the Police, they had to leave the march.

The 4 Pillars of the Church of Euthanasia

Actively reduce the planet population is the main purpose of the Church of Euthanasia, which has 4 methods, or pillars, to gain their goal:

Cannibalism (of the already dead)

On the official website of the Church of Euthanasia, you can find information on how to butcher a human carcass.

Another famous slogan of the Church is “Eat a Queer Fetus for Jesus“.

Of course, the Church of Euthanasia soon becomes a target of the anti-abortion activists, or as they call them “hysterical Christians”.

The Water of Life

The water of life is Urine. Especially, according to some “expert” the morning urine.

I am not sure how this is related to human extinction but that’s it. Urine is rich in nutritional value and it’s free so give it a try and let us know.

What the Church of Euthanasia means by Sodomy is “any sexual act not intended for procreation“. Even though it is strongly advised and promoted.

But, anyway, it’s your choice and if you don’t follow this method, there is still the second pillar available, abortion.

In the mid-Ninety, the Church planned to create a number for a “Suicide Assistance Hot-Line” and by assistance they meant suicide instructions.

The project failed because the phone company refused to activate the line.

The Church of Euthanasia had a section of the website dedicated to those who wanted to have more information about why and how to kill yourself.

It appears, in 2003, this was inspirational for a woman in Missouri who was found dead in her house.

Next to her body, printouts from the Web site were found.

In particular, the recommended methods to end your life using helium to cause asphyxiation. Apparently, she followed all the steps.

Although it’s very easy to find this kind of information in hundreds of other websites, the instructions were removed.

The one Commandment of The Church of Euthanasia

“Thou shalt not procreate” is the only Commandment of the Church. Here you can read part of the official prayer:

“Great Spirit, I am unworthy;
My species has disgraced itself.
Of all the species that live, or have ever lived,
Mine is the lowliest.
Lower than the flowers who fill the air with sweet pollen, […]

Great Spirit, if this is so, then I pray for extinction.
Let my species become extinct, and vanish from the Earth.
Let my loins be barren,
Let my seed not sprout,
Let the race of men fall like leaves. […]”

9/11 and the Church of Euthanasia

One of the inspirations for the Church of Euthanasia is the Dadaist movement.

Both Chris Korda and the Dadaist from the early Twenties Century find the modern world grotesque.

The only way to make a message go through this surreal society model is to use absurd and grotesque methods as well.

What happened after the 9/11 attacks is a perfect example of this approach.

As you probably know, Theodore Kaczynski wrote the “Unabomber Manifesto: Industrial Society and Its Future“.

In 1996, Chris Korda and Lydia Eccles launched the presidential campaign “Unabomber for President“.

The campaign was soon very popular in the country.

But the media, as they do when they don’t get the point, were just making fun of the initiative.

Here below the Kickstarter Project for the realization of the Documentary “Save the Planet, Kill Yourself” about the ideas, characters, and history of the Church of Euthanasia.

Do you need a cult with more faith in humankind? Check “Unicult, Unicole Unicron: a Pop Star Cult Leader & the Power of Creating your Own Reality “.